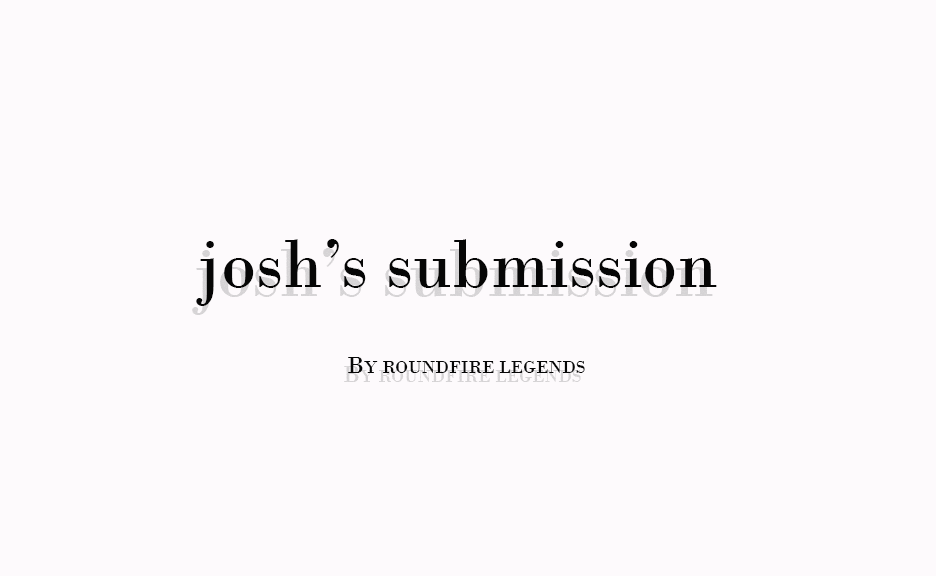 This is a story about racism. Though it’s most likely not what you had in mind.

The day had finally come. It felt like forever ago since Josh had slipped his short story into an envelope he bought from Staples, walked to the mailbox and dropped it inside with an invisible prayer and the dream of seeing his words in publication. Published. Like a real writer. While waiting for a response, the days seemed longer and more tedious than they had in his entire twenty-seven years on earth. But the wait was finally over. In his hands, his trembling, anxious hands, Josh held the reply letter from Urban Words Literary Magazine. In his hands, he held his hopes, his dreams, his everything.

He savored the moment; running his thumbs over the smooth, dry paper surface of the envelope, whiffing at the crisp cardboard aroma. The three months he had spent homeless was hard, writing the short story about it was even harder. But it wasn’t for nothing. The sacrifice was well worth it. The fruit was ripe. It was all coming together now.

The spiders crawling in his stomach reached his chest as he tore a thin strip off the short end of the envelope, turning it on its end and letting out slide into his awaiting palm a single piece of 8 1/2 x 11 printer paper folded in half. Josh rested the envelope on his desk and let out a soft, long exhale in an attempt to tame his pounding heart. Then, he unfolded the piece of paper and read the short block of text printed in small Times New Roman lettering.

Thank you for your submission to Urban Words. While it is clear you are a talented writer, and though your choice to go homeless for three months is interesting to say the least, we are going to have to regretfully pass on your submission.

Urban Words is dedicated to representing urban writers; Africans, Hispanics, and other minority groups. Perhaps another publication would better suit your situation. Thank you for your submission and good luck in the future.

The tingle in his belly was quickly replaced with a sharp pain, as if his intestines were being tied like shoelaces. He placed the letter on top of the torn envelope and slouched in his chair, winded and numb.

I’m not urban? he wondered. I’ve lived in the city my whole life.

In fact, the reason Josh had gone homeless in the first place was to see his city, and life, from a different angle. To gain a broader perspective and to walk in the shoes of someone unlike himself.

And Josh was a minority group. In a recent visit to the Statistics Canada website, he learned that non-whites now make up the majority of every major city in Canada.

Not everyone is a stat freak like you, he lectured himself internally. You failed for one reason, and for one reason only. You just. Weren’t. Good enough.

At work that day Josh stood in his usual spot on the assembly line, trying to stay awake as the bottles of eye contact lens solution rode slowly by on the conveyor belt, trying their very best hypnotize Josh into slumber with their infinitely repetitive forward motion. He liked to pretend the bottles were at the airport, catching a flight somewhere exotic. And in a way, that wasn’t very far from the truth. Each small plastic bottle was heading out on an adventure to meet its final destination at the abodes of the sightly impaired. Thoughts like this, daydreams of his wild imagination, helped Josh to stay alert, or at least conscious during his shift, as very few of his co-workers spoke English well enough to carry an intelligent, or at least entertaining, conversation. Most of them were older and Pakistani or Filipino, much too involved with the likes of their familiar culture to worry about an outsider like Josh.

But on that day, something happened to pull Josh’s attention back to the present, albeit mundane, reality. Two older Filipinas standing next to him on the assembly line were speaking in English about the upcoming 2020 American election. Though Josh felt guilty for eavesdropping, the familiar dialect drew him in like an apple pie fresh out of the oven resting on a window sill.

“I hear Trump may win again,” said the shorter-haired Filipina with glasses.

“Why?” the equally short, pony-tailed Filipina drew out in a long wine, like the police sirens of olden days. “Trump so stupid. His face so orange.”

The shorter-haired Filipina laughed with genuine jest. It was actually more of a cackle than a laugh, Josh thought. “He fat too,” she added.

The pony-tailed Filipina shook her head distastefully. “America racist, that’s why. They like racist president.”

Though a large part of Josh was pulling him back as he turned to speak, urging him to mind is own, the stat hound in him just could not resist. “Actually,” said Josh to the ladies, soft in his approach as to not startle them. “I’ve read that employment numbers for non-whites are at a record high under the Trump administration.”

The look on their faces resembled that of someone with the taste of battery acid fresh on their tongue.

“You rude,” snapped the pony-tailed Filipina. “You no listen.”

“Yeah. You racist. You racist like Trump,” replied the shorter-haired Filipina.

The two ladies turned their backs on Josh and continued the rest of their conversation under the guise of their native tongue. Josh turned his attention back to the slowly passing bottles of eye contact lens solution moving infinitely forward.

It was hot in the warehouse.

At lunch in the cafeteria, the Pakistanis sat at one table, speaking to each other loudly in Pakistani, and the Filipinos sat at another table, speaking quick and sharp in Filipino. Josh ate alone at the back table by the emergency exit. He didn’t mind. It allotted him time to work on his writing, which most days he did and did so diligently. But today, defeat had left him dry of muse and wary to put a pen to paper, at least for the next little while. Instead, he found himself scrolling through his phone, catching up on social media, and responding to emails that had long gone unread.

It was during this checking of e-mails that Josh came by a reply from an online literary magazine, Dot-ComUNITY, where he had submitted his story some time back. The editor, a girl by the name of Lindsay, had enjoyed his content and was interested in publication, leaving Josh a phone number to call to set up a meeting. Not wasting a single moment, Josh called the Dot-ComUNITY office and scheduled an appointment with reception for that afternoon. Then, he went back to the packaging line with a pleasant melody in his head and a soft cotton-candy cloud under his feet.

The heat wasn’t all that bad, he thought.

Josh sat in one of the four chairs against the brick wall that lined the entrance to the loft studio office. The open space and clear glass desks were complemented by the floor to ceiling plate glass window looking out at the towering skyscrapers of the city, and the massive sign reading ‘Dot-ComUNITY’ hanging bolted from the roof. It was all a little overwhelming. The people at the computers on twin rows of glass desks, all more or less around Josh’s age, were dressed so professional that Josh felt sloppy in his golf shirt and jeans. He felt as if they could all see how nervous he was and tucked his hands between his thighs to keep them from shaking.

Soon after, Josh was approached by a top-heavy Hispanic woman a few years older than himself. She had brown salon-curled hair running down her back, big hoop earrings, and eyebrows drawn in with makeup. A large, loose T-shirt with the text “KILL TRUMP” printed in bold lettering, was draped over her broad shoulders and underneath, black leggings hugged tight to thick, strong thighs.The look on her face though, if not for the large sign behind her displaying the company’s name, would have given Josh the impression that he was waiting in the wrong office.

“You’re Josh?” the woman said with some confusion.

“I’m Lindsay. We spoke on the phone.”

A rush of relief put an effortless smile on Josh’s face. “Hi, Lindsay. It’s nice to meet you in person.”

He stood to shake her hand but was worried by her overall distant demeanor. And as he followed her through the rows of desks Josh couldn’t help but feel like a dead man walking. Something was wrong.

The eyes of the people at the computers followed Josh until he was in the office with the door closed behind him.

Not a moment after they had taken their seats, Lindsay said, “I’m sorry. I was under the impression that you were…of color.”

A ball of numbness formed in Josh’s throat as the realization of what was wrong became evident. “Is that a problem?”

But he already knew the answer.

Lindsay’s attention sunk toward her desk, giving Josh more eyelid than eye. “Well, our publication is meant for a more diverse audience. We’re looking to push urban voices, not–”

She stopped herself, reworded, and continued, “It’s just that when it comes to social suffering, white people aren’t really the voices that should be talking about it. It wouldn’t be authentic. You understand, right?”

Josh’s face became blood with rage as a force of words flew out his body, “Not authentic? Not authentic? I would have to disagree! I think the country of Germany would disagree! In 1919, The Treaty of Versailles damned a whole generation into poverty by the sanctions put on them. It was a suffering so severe that they were desperate enough to put a guy like Hitler in charge. And then ask the people of Poland, Austria, and France if they agree that their suffering wasn’t authentic when Hitler came for them, swallowing up their countries and any opposers in his self-righteous path. The soldiers who fought and died in those fights, protecting their sovereign soil, was their suffering not authentic enough for you? What about the potato famine in Ireland? Or Russia’s invasion of Ukraine? Why is it always, always, always about your problems? Huh? Tell me that! What makes you so god damn special?”

Lindsay sat back in her chair, looking back at Josh, emotionless. Because Josh hadn’t said any of that. It was nothing more than a fleeting thought, gone in a flash as quick as it came. Maybe it was that thing they call racism, Josh didn’t know. But it left him drained and bitter inside as he stood up, smiled politely, and said, “Yes. Yes, that’s fine. I understand.”